The novel-in-progress, The Sexual Lives of Missionaries. It’s been at the center of my daily work for five years.  Here is a picture of the stacked-up pages: 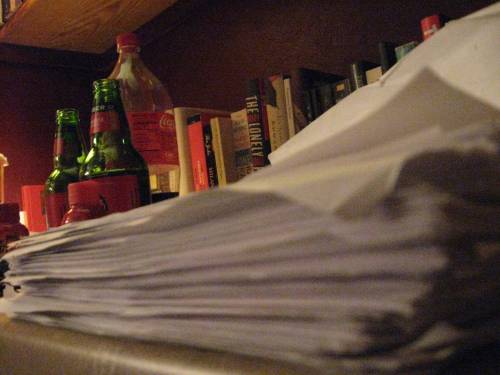 The project I’m likeliest to complete next is a nonfiction book about Greg McCaw, my childhood pastor,

who came out as a gay man and lost everything. You can see a preview of his story at The Rumpus.

Some other things I’ve been doing:

1. “The Question of Where We Begin,” an essay about point of entry, suicide, and the origin of the world, at Gulf Coast.

1a. Nick Bruno printed a limited edition (75 copies) letterpress chapbook (with woodcuts!) of my story “The Truth and All Its Ugly,” which originally appeared in Surreal South and Harper Perennial’s Fifty-Two Stories (you can read it here.)

2. New essays out the next few months in Arts & Letters, Sou’wester, and Cream City Review.

3. A weird reviewish piece about Lydia Davis and Amelia Gray’s Museum of the Weird at The Faster Times.

4. An ebook edition of my 2008 story collectionIn the Devil’s Territory will be available later this year from Dzanc/Consortium, for Kindle, Nook, SonyReader, etc. (!)

Thank you for paying attention!